The Metaverse – a genuine opportunity for future work practices and businesses or yet another over-hyped view of the future?
“The time is now for a new approach to politics”
You are here: Home  ⁄  Devolution and Governance  ⁄  The SV voting system isn’t working; the Greens are on the march and why wasn’t the West Midlands Mayoral contest closer?

The SV voting system isn’t working; the Greens are on the march and why wasn’t the West Midlands Mayoral contest closer?

In this article, Chris Smith (Managing Director, Centre for the New Midlands CIC) looks at the 2021 Election results and considers some of the key talking points – Changes to the voting system; the rise of the Greens and the Street vs Byrne race to be Mayor of the West Midlands.

If you are into your politics, the Super Thursday elections of 6th May 2021 did not disappoint for drama and talking points – and not just for the antics of Count Binface in London or the ‘different’ election videos produced by Tiger Patel in Blackburn.

Following the postponement of the elections originally scheduled for May 2020 as an early consequence of the pandemic, the vast majority of the country found themselves with the opportunity to go to the ballot box and elect regional Mayors; local councillors up and down the country, as well as votes being held to elect Members to both the Scottish Parliament and Welsh Assembly.  There was also the small matter of electing 39 Police and Crime Commissioners.

Apart from the well publicised fall out from the elections for both Keir Starmer and the Labour Party and alongside the ongoing  ‘will there, won’t there be’ IndyRef2 in Scotland, the elections conjured up some other talking points that I will hopefully unpick here.

In the West Midlands Mayoral election, there were 11,890 rejected ballot papers in the first stage of voting, which equates to 1.9% of votes cast being deemed worthless.  London’s Mayoral elections saw 114,201 ballots (approximately 4%)  rejected in the first round of the London Mayoral race (Voting Counts, 2021).  In the West Midlands, the vast majority of the ballots rejected were either due to voters “Voting for more than one candidate as to the first preference vote” (4,148 votes) or “Unmarked as to the first preference vote” (5,638 votes).

These figures should cause us all concern as there are profound implications for our democracy if so many views are discounted so easily.  It cannot be right that a voting system manages to facilitate such a substantial number of ballot papers being declared void and with it, so many people losing their right to have a say on who they are governed by.

If we compare these figures to a General Election turnout and the First-Past-the-Post (FPTP) system deployed, e.g. Coventry South in 2019, there were just 138 ballots rejected out of 45191 papers issued – just 0.31% of votes were discounted. It is likely that a significant proportion of these votes would also have been spoilt deliberately rather than due to a misunderstanding of the process; indeed, supporters of FPTP would argue its simplicity is one of its greatest strengths.

There are a number of different voting systems which could be introduced to enhance participation and the efficiencies of the Mayoral elections – of which all bring their associated pros and cons.  Back in March, Priti Patel (Home Secretary) confirmed that the Government planned to change the voting system for both Mayoral and Police and Crime Commissioner elections away from STV to FPTP, which if in operation, would have seen them take the Mayoralty of Cambridge and Peterborough, rather than lose it in the second round after second preferences were taken into account.  There are also suggestions that this change to the voting system could bring the Conservatives better fortune in the London Mayoral elections, although this remains to be seen.  It would be naïve to think that a Government would seek to change a voting system if it didn’t think that it would benefit from the changes; Proportional Representation is a long way off ever being implemented for Westminster elections for the same reason.

However, the current system cannot be the long-term solution if we want to maintain and enhance the credibility of these increasingly important regional elections.  The SV system has not only managed to facilitate the removal of thousands of votes, but has failed to deliver any substantial changes to the ‘winners’ of the elections than any of the voting system’s alternatives would have produced.  The alternatives would have produced clearer results; quicker outcomes and reduced substantially the chances of the electorate being perplexed by the system.

Across England, the Green Party gained 88 Councillors, taking its total up to 151.  Whilst it failed to take overall control of any councils, it has become the joint largest party in Bristol; finished 3rd in the London Mayoral election and 3rd here in the West Midlands Mayoral election.

Across the region, the Green Party finished 3rd in each and every one of the 7 of the local authorities of the Combined Authority. A couple of their particular highlights include Solihull, in which they secured 10.5% of the vote and comfortably finished ahead of the Liberal Democrats in Coventry, picking up 7.8% of the vote vs the Lib Dems’ 3.79%. 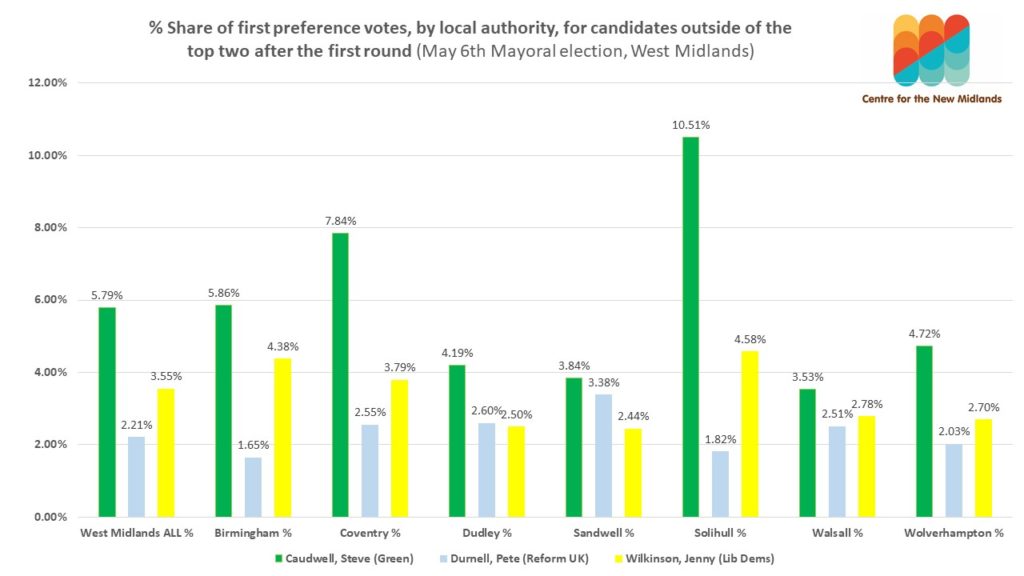 Whilst the party only has the 1 Member of Parliament, this solid performance in the local elections should provide the party with the platform and confidence to grow into much more of a credible force within British politics – at whose expense this will be is unclear but the Liberal Democrats in particular should be extremely concerned.

The Green Party is beginning to demonstrate its ability to take seats from all three of the traditional parties across England.  This could be due to the efforts of activists in raising the profile and interest in environmental issues both regionally and at a national level; it could be due to voter dissatisfaction with the status quo and the ‘old parties’ as Nick Clegg once referred to the Conservatives and Labour, or it could be due to the party’s focus on local issues that really matter to voters.  Whatever the reasons, the Greens will be hoping these results are a springboard for further electoral success.  Could there even be a ‘progressive’ alliance (formal or otherwise) formed between the Liberal Democrats and Greens to take on ‘Tory rule’?

Given that the West Midlands has historically been a strong Labour heartland, this is a heavy defeat for the Labour Party and such an increase in Andy Street’s majority will be difficult to swallow for party chiefs and its activists.  Alongside the results in the West Midlands being part of a broader swing to the Conservatives in the Midlands and North of England, there were other factors that the Labour Party will need to unpick as to why Street was able to win with such a comfortable majority.

The Red Wall strategy adopted by the Conservatives has seen, and continues to see, life-long Labour voters turning towards the Conservatives, either due to their disillusion with Labour; support for Boris Johnson personally or the levelling-up agenda more broadly. Ben Houchen’s victory in Tees Valley – winning the mayoralty with over 72% of the vote – is testament to the party’s ability to appeal to geographies once considered Labour heartlands.

In the West Midlands mayoral race, whilst Liam Byrne took first round wins against Street in Birmingham, Coventry and Sandwell, the margins (in % of votes cast) between the two candidates were 8.2%; 1.3% and 7.7% respectively.  If we look at Street’s wins across the region, the difference between the candidates was 63.3% vs 27.3% (votes cast) in Dudley; 67.6% vs 15.4% in Solihull and 58.1% vs 33% in Walsall.  Street was just 1.28% of votes away from the 50% required to win the Mayoralty in the first round in comparison to the 8.1% he was away from achieving the same feat in the first round of the 2017 election.

It wouldn’t be accurate to attribute Street’s win solely to the national swing and I suspect there were a number of other factors linked to his win; indeed Street has made efforts in the past to distance himself from the Conservatives.

The Conservatives were able to point to a demonstrate a track record of delivery since the Mayor’s post was created in 2017 and some significant infrastructure spend right across the region.  Street has been consistently opposed to Brexit but was never one of its most vocal opponents and didn’t publicly back a second referendum.  It should be noted that Street’s own personal profile has increased significantly over the past four years and his businessman first approach seems to resonate well with voters.  The lack of City Council elections in Birmingham will also have had an impact on the Labour turnout and go some way to explain the relatively narrow Labour win in the city which has Labour MPs in 8 of its 10 parliamentary constituencies. 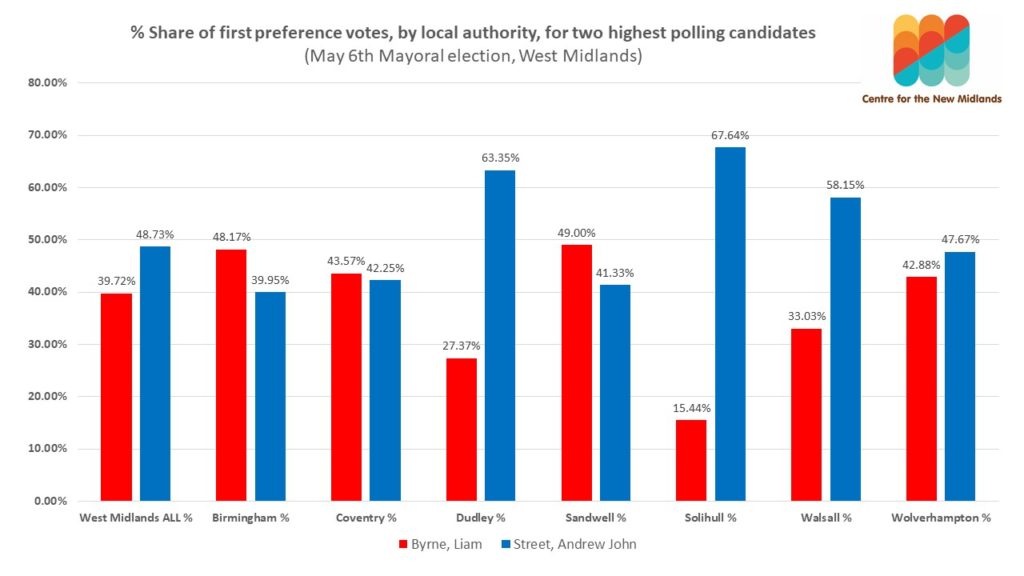 The Conservatives had a much better set of election results than even they could possibly have imagined.  However, there were some casualties in what some have referred to as the ‘Blue Wall’ – seats considered to be those that have been held by the Conservatives since at least 2010 and where their majority is under 10,000. Adding to the Cambridge and Peterborough mayoral result, Labour and the Liberal Democrat victories saw the Conservatives lose control of Cambridgeshire County Council as an example.  In the same way as the question is asked of the Red Wall, it is unclear if this shift in voter attitudes is part of a permanent realignment of British politics or still intrinsically linked to the EU referendum.

In Greater Manchester, there were some examples of a ‘Burnham Bounce’ where Labour held or increased their councillors in some of the local authorities including formerly Conservative held Trafford.  Labour also retained several of its Police and Crime Commissioners across the country, including Simon Foster as the new PCC for the West Midlands.

The Conservatives should enjoy these results for now but know that they face much greater electoral challenges ahead.  The economic consequences of the pandemic are bound to hit pockets harder over the next few years alongside the broader impact of the crisis on society as a whole, whether that’s in terms of waiting lists, jobs or widening inequalities.  The Conservatives will be hoping that these broader and deeper challenges will have eased by the time voters next go to the polls, but they will almost inevitably be at the forefront of the electorate’s minds in 2024.

Chris is the Managing Director of the Centre for the New Midlands, co-founding the organisation in January 2020.  Chris has over 15 years of experience working within the Higher Education sector, with extensive experience in stakeholder engagement; fundraising; student recruitment and management information.

Chris began his career within Advancement in 2010 at Coventry University, before joining the University of Westminster as Director of Development and Alumni Relations in 2016. Chris was promoted to lead the University of Westminster’s External Relations directorate, overseeing the institution’s alumni engagement and development programmes; alongside the delivery of its Short Courses’ provision and Corporate Partnerships’ strategy.  Chris has led international award-winning teams and takes great pride in building strong and effective teams throughout his career.

Chris co-founded the AlSadi Changing Lives Programme which over the past decade has provided hundreds of students from the UK with fully funded volunteer programmes to Jordan, working with some of the nation’s finest third sector organisations.

Chris is proud to be a member of the NSPCC Business Board in Coventry and Warwickshire and to have been a Trustee of the University of Westminster Students’ Union for two years.  Chris is an avid Tottenham Hotspur supporter and a ‘Man of Kent’ by birth but an ‘adopted’ Coventrian having lived in the city since 2003.

Connect with Chris on LinkedIn